[The decline of one of the most threatened European birds of prey: 41 years of observations on the Lanner, Falco biarmicus in Sicily]

[The results of a research on Lanner in southern Sicily, carried out between 1978 and 2018, are reported. 32 Lanner nesting territories have been taken into account, from sea level up to 1200 m of altitude. Until 2005, there were about 25 nesting pairs in the area; but in the following years there was a steady decline. At least 16 sites have been gradually abandoned because of human persecution and, at a lesser degree, of the interference with the Peregrine falcon, Falco peregrinus, and the Bonelli’s eagle, Hieraaetus fasciatus. At present, the number of Lanner pairs breeding in the study area is around 12. From 120 nesting attempts followed, 216 youngs fledged, with a productivity of 1.80, with breeding success of 1.98, fledging rate of 2.40. Out of 109 nests in which there was egg laying, 90 were successful. Out of successful nests, 11 fledged 1 young (12.2%); 37 nests 2 youngs (41.1 %); 37 nests, 3 youngs (41.1%); 5 nests, 4 youngs (5.6%). The number of pairs that have laid eggs, in relation to the number of the monitored nests, was of 90.8%. The ratio between the number of nests in which youngs were raised and the number of pairs that laid their eggs was 88.1%. The ratio between the number of nests from which youngs fledged and the number of breeding pairs was 93.7%.The number of successfully breeding nests, in relation to the number of monitored nests, was 75%. As regards the diet, birds represent Lanner’s most frequent preys. Out of the 415 preys identified, 383 (92.3%) are made up of birds, 29 (7%) by small mammals, 3 (0.7%) by reptiles. In addition to human persecution, the population of Lanner in Sicily is influenced by interspecific competition, particularly with the Peregrine falcon; but in 2 cliffs, about 1 km long and with a substantial wealth of prey, both falcons have been successfully reproducing for over 10 years]. 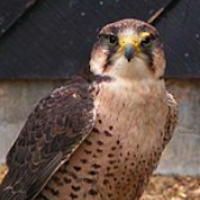 This work is licensed under a Creative Commons Attribution-NonCommercial 4.0 International License.

Most read articles by the same author(s)